In our report, EXCESS NEW EQUITY: Fraud or poor corporate governance? (12 Jan 2018), we detailed how some companies were raising equity despite being in a net cash positive position and generating free cash inflows. This new capital appeared to be excess to requirements and gave the impression that either the company was about to make a large acquisition or cash flows were not real.

To gauge whether a company’s cash flow statement makes sense, we have designed an abbreviated version. This involves calculating an internal cash flow requirement: starting with operating cash inflows (OPCF, sometimes referred to as Cash from Operations or CFO), subtracting cash outflows where we have a high level of certainty over their validity. These include capex, dividends, share buybacks and acquisitions. Most would agree that dividends and share buybacks are difficult to fake. It is also relatively hard to fake the cash flows associated with capex and acquisitions; however, they can be a way for management to illicitly syphon real capital out of the company at the expense of minorities, rather than being where management would hide fake cash flows. As such, they are likely genuine cash outflows. The item we then calculate is the amount of capital raised externally from issuing debt and equity.

Logically, the balance of internal and external cash flows should result in mild inflows as a business grows. After all, it is reasonable for a company to grow cash balances broadly in line with sales. Significant surplus flows suggest that non-core assets are building up on the balance sheet, most often in the form of excess cash or short-term investments. Deficits suggest that non-core assets are being run-down.

We illustrate how our abbreviated cash flow works for Thailand’s largest mobile operator, AIS (ADVANC TB) in Figure 20. AIS is broadly free cash flow (OPCF less capex) neutral but still pays a hefty debt-financed dividend. Internal cash outflows have totalled THB84bn over the past five years (FY12-FY16) offset by external cash inflows of THB76bn. Net outflows of THB7.9bn equal just 3% of cumulative operating cash flows and have been financed by running down the company’s cash balance. This is how we would expect a sensible cash flow statement to look. Unfortunately, not all cash flows look like this... 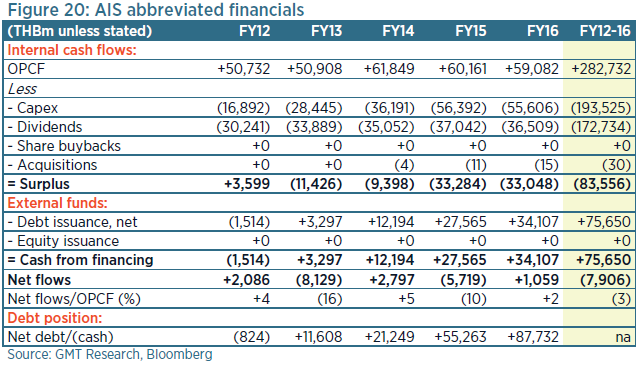 China Animal Healthcare’s (940 HK, CAH) abbreviated cash flow, shown in Figure 21, looks far stronger than AIS’s. It consistently generated free cash inflows between FY09 and FY13. This poultry and livestock drugs company originally listed in Singapore back in 2007 by way of a reverse takeover, and subsequently moved its listing to Hong Kong in 2010. It brought in credible outside investors including global investment firm Blackstone (BX US) in 2010, and leading animal pharmaceutical company Eli Lilly (LLY US) in 2013. But looks can be deceiving…

Between FY09 and FY13, the company reported internal cash inflows of RMB272m, even after capex, dividends, share buybacks and acquisitions; however, despite being net cash positive, it raised a further RMB1.3bn externally over the same period (an even mix of debt and equity), resulting in net inflows of RMB1.6bn, equal to 136% of cumulative operating cash flows. The raising of excess capital should have been a warning sign to investors as the company turned out to be a fraud. Presumably the excess capital raised was needed to keep the business afloat and maintain dividends as reported OPCFs were overstated. Indeed, the initial findings of a forensic investigation announced1 in early 2017 estimated that around RMB900m of cash was unaccounted for, over 90% of its 1H14 cash balance. It is unclear whether this cash was misappropriated or the bank statement had been forged in order to hide fake cash flows. 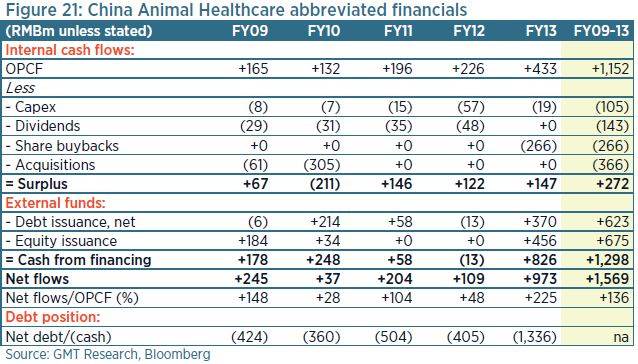 In many ways, China Animal Healthcare ticked all the right boxes from an investment perspective: it had been listed for a long time, close to eight years, and had highly credible strategic investors. It is often assumed that fake cash flow frauds will be discovered relatively quickly and that credible strategic investors will have done their due diligence. This is clearly not the case on both fronts. The company is also unusual in that it returned RMB266m to shareholders in FY13 as part of its Singapore de-listing. It is assumed that companies paying large dividends or share buybacks are unlikely to be frauds. However, it depends on how these are financed. In the case of China Animal Healthcare, it is not clear if share buybacks were paid from OPCFs, the proceeds of debt or Eli Lilly’s strategic stake. Hence, shareholders need to be concerned if companies are raising too much capital relative to their requirements.

We downloaded data from 7,500 companies globally in order to gauge what net cash flows typically are relative to sales on a sector basis. As shown in Figure 22, most sectors report mild inflows of up to 13% of sales with the 80th percentile normally recording inflows of less than 40% of sales. The software sector appears to report the largest inflows relative to sales. We think that this is because 40% of the sector IPO’d within the last five years. It is worth bearing in mind that this scan does not work especially well for Real Estate companies or REITS given a different cash flow layout. Anything higher than the 80th percentile is flagged within our screen.