All Roads lead to China

After the publication of our report which evaluates the financial health of the listed corporate sector globally, we sat Gillem down and asked him a few questions in this short video. Within, he muses that all roads lead to China – but not in a good way. The recurring conclusion from our reports is that the vast majority of companies with problematic accounting are Chinese. Despite an over-leveraged corporate sector with falling EPS, China's domestic stock market is the most expensive in the world....by far (see the chart within). And yet China's analysts have more buy recommendations relative to total recommendations than any other analyst community globally (once again, see the chart within). This is partly because the government has been actively supporting the stock market while concurrently intimidating those that don't tow the party line. There is, after all, no bad news in China. If the authorities really wanted to avoid embarrassment, maybe they should just shut the market down? The government can't maintain this facade forever and we recommend investors short the A-share market wherever possible.

At GMT Research, our process begins by picking an accounting or corporate governance theme and conducting a scan across listed Asian companies. We then hone in on those which appear to be abusing that particular issue and write them up in more detail. For example, in HIDDEN DEBT: Manufactured Cash Flow (25 May), we wished to highlight companies which had reported an unusual increase in working capital relative to sales. We’ve become concerned that some companies are increasingly aggressive in sales and profit recognition in light of deteriorating economic conditions. While in some cases this can be spotted by monitoring receivables, a lot of companies have begun to disguise increasing trade receivables as other current assets, such as notes receivable and loans. Aggressive sales recognition should show up as deteriorating operating cash flow relative to profit, but this can be offset by creating the appearance of cash flow from increasing payables and other current liabilities. In order to address this, we conducted a scan across the whole of Asia and took a more in-depth look at those companies where the increase in current assets and liabilities exceeded 60% of sales over the past five years. Of the 48 companies highlighted in our scan, 43 (or 90%) were Chinese (10 H-share and 33 A-share). In other words, this is largely a Chinese phenomenon. 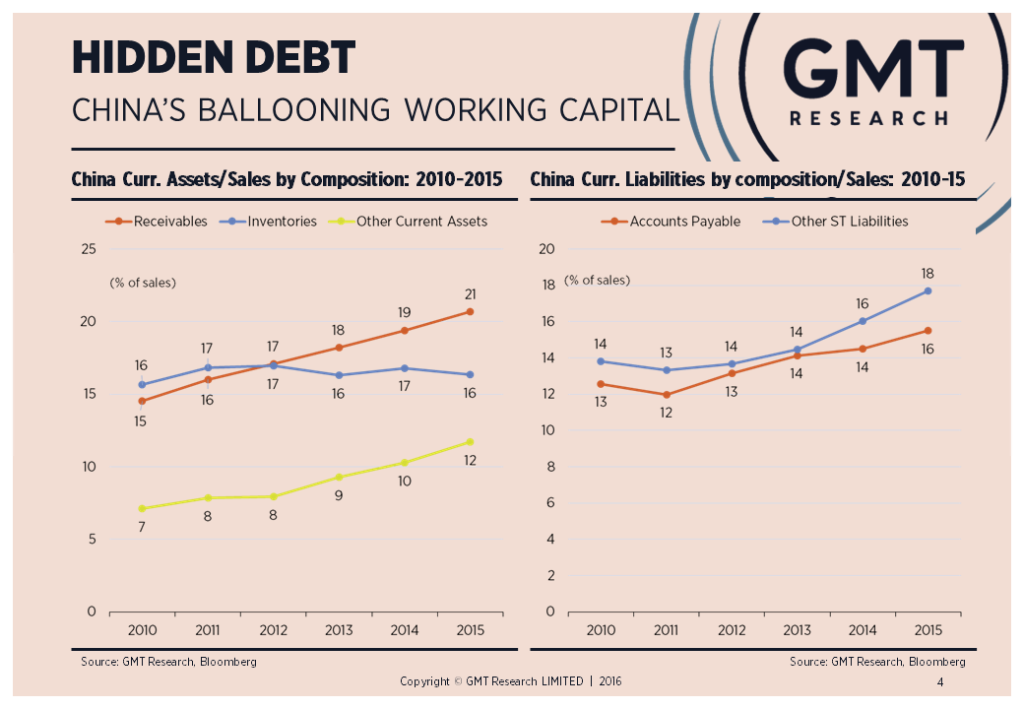 In another theme, we decided to detail every related party transaction across ASEAN and Hong Kong. After all, every accounting shenanigan that we’ve written on includes related party transactions. Alarmingly, we found that 95% of all companies were engaged in related party transactions across pretty much every market. While many of these could be explained away in ASEAN, it was clear that the Chinese companies listed in Hong Kong were up to all sorts of antics. Companies were sourcing materials from the founder, lending money to and from associates in order to flatter profits, and so on. For more details, read our report RELATED PARTY TRANSACTIONS: Family Games in HK and SG (23 Feb).

If you’re not yet convinced that something’s wrong with China’s corporate sector, take a look at our report on government subsidies, BENEFITS STREET: Subsidies to Chinese companies are ballooning (8 Sept). We found that a 98% of all Chinese companies had some form of direct subsidy and that for 20% of all companies this exceeded 20% of profit. We made no attempt to quantify the impact of hidden subsidies such as cheap electricity, loans or land but these could be even more material. Chinese returns on equity are already some of the lowest in Asia. One shudders what returns would be without subsidies.

But why are accounting shenanigans so common in China? Part of the reason could be down to leverage. The Chinese corporate sector is the third most highly leveraged globally, as highlighted in our recent report, GLOBAL EVALUATION: Suspended Disbelief (13 Oct). Leverage creates a need for business owners to meet the expectations of outside interests, such as bankers, in order to ensure the supply of credit continues. As such, this creates an incentive to aggressively recognise sales, manufacture cash flow and create fictitious profits from related parties. 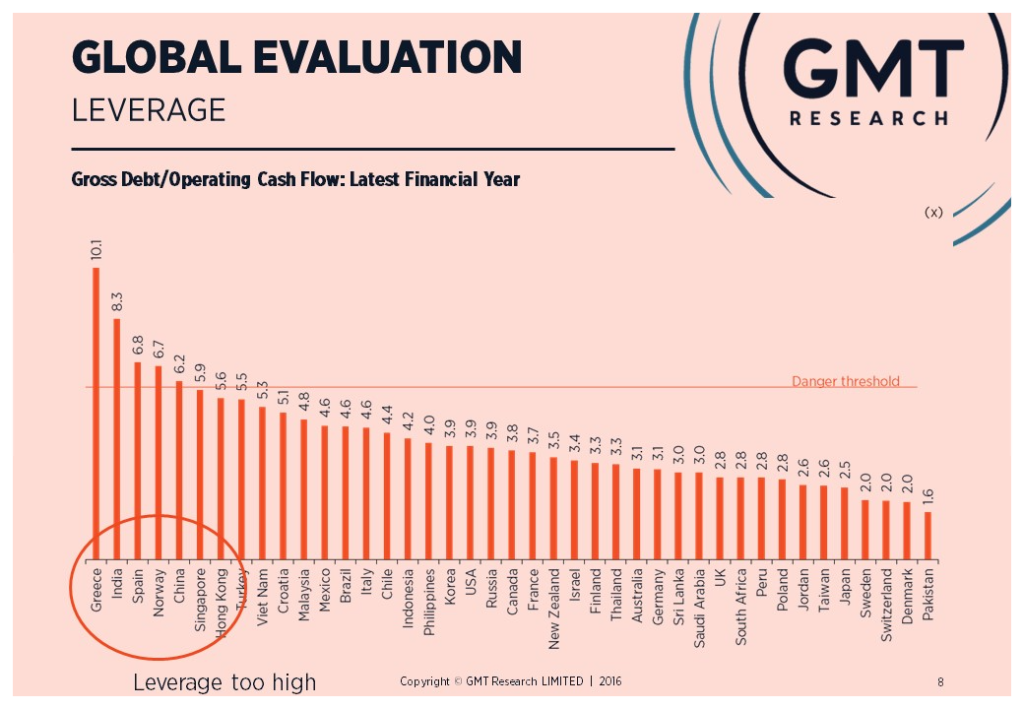 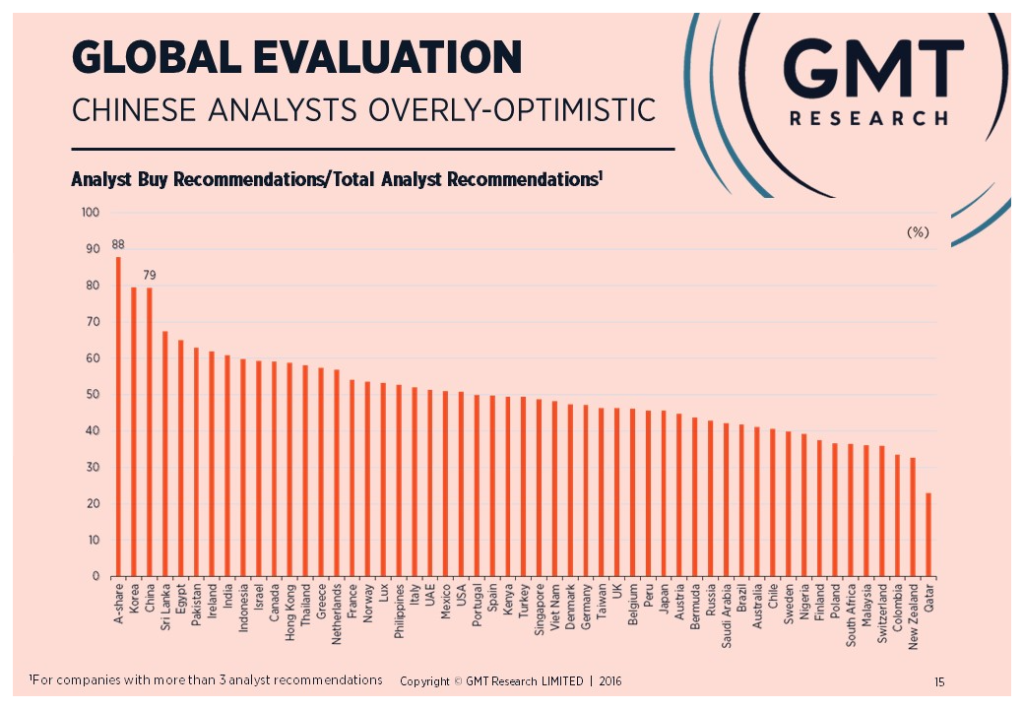 Given this supposedly bullish sentiment, it’s perhaps no surprise that China’s stock market valuations are demanding. In fact, the median trailing price earnings ratio (PER) of Chinese domiciled companies is 39x. As the chart below shows, this makes Chinese companies the most expensive in the world…by far. India is the second most expensive on 26x. This PER multiple rises to 48x if we only include A-Shares! We prefer to use a median multiple as opposed to a weighted index multiple because indices are often distorted by one or two large companies. 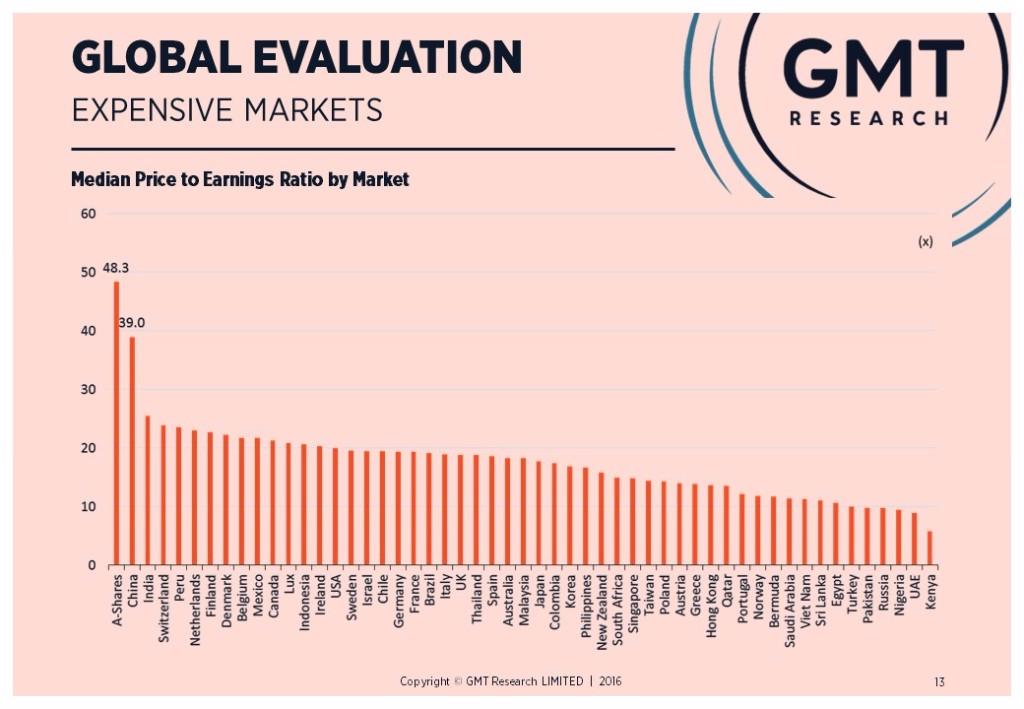 Given demanding valuations, you would expect Chinese corporate profits to be rising at a brisk pace, but no, they’re falling. Weighted average EPS for the CSI300 peaked in August 2015, and is now down around 11% YoY. Given that its over-leveraged corporate sector is still generating free cash outflows, capex will have to fall further in order for companies to begin the long de-leveraging process. That means EPS will fall further. 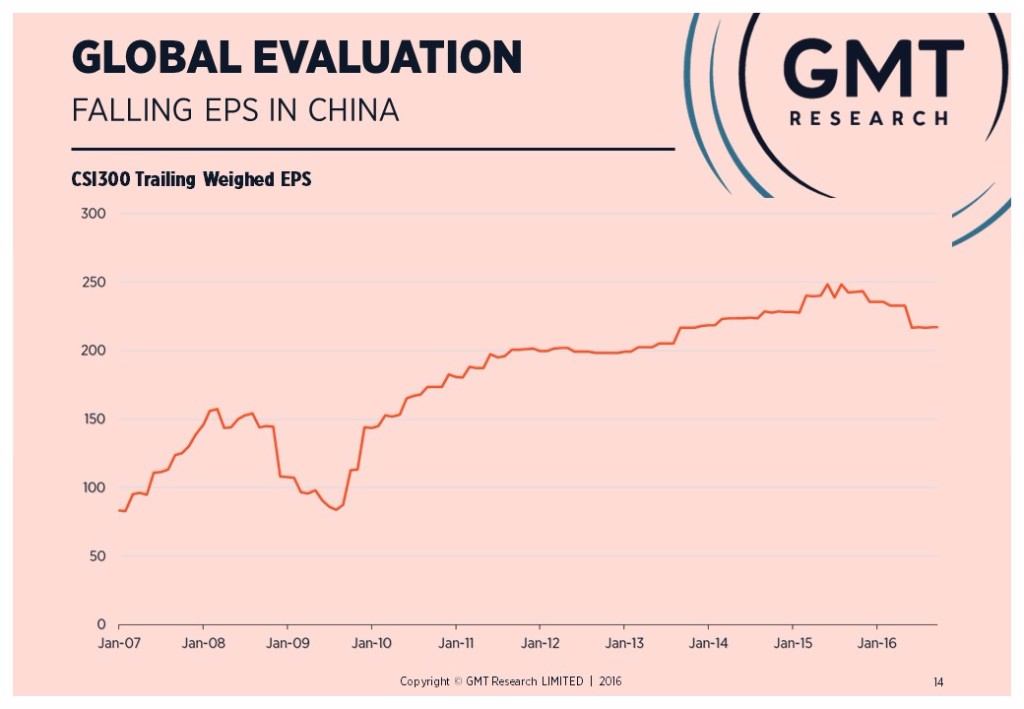 So how can analysts be so positive on one of the world’s most expensive stock markets when EPS is falling, companies are over-leveraged and accounting is questionable? Well, part of this optimism is due to the conflicts of interest inherent in the broking system and part is just naivety; however, intimidation also seems to have played an important role. There have been widespread reports that analysts, traders and brokers have been arrested by the authorities(2). Indeed, the government was reported to be actively supporting the stock market again after the panic sell-off earlier this year(3).

Arresting stock brokers and analysts is equivalent to shooting the messenger. Some of us remember the last time a government tried this – back in Southeast Asia in the lead up to the 1997 Asian Financial Crisis. It smacks of desperation. A free market is just a pricing system which tells you where to allocate resources. China’s quasi-nationalisation of its stock market seems to be because it doesn’t like the message. Maybe the government should shut it down instead. After all, it’s going to cause them a lot more embarrassment in the near future given leverage, the direction of earnings and valuations. We would expect the main stock market indices to more than halve from here. Sell and/or short.

Nigel Stevenson
We estimate that Australia's largest construction company CIMIC has inflated profits by around 100% in the last two years through aggressive revenue recognition, acquisition accounting and avoidance of JV losses. A lack of supporting cash flow has been obscured by the increased sale of receivables and reverse factoring of payables. While reported net cash was 69% of equity at YE18,...
Read More

Nigel Stevenson
Artificial sales from Celltrion (068270 KS) to its sister company Celltrion Healthcare (091990 KS) have led to a massive build-up of unsold inventories on the latter’s balance sheet. A billion dollar write-down could be on its way. By selling almost all of its drugs to Healthcare, Celltrion has been able to consistently overstate revenue and profits. It recognised sales even...
Read More
close01
close01