We estimate that Australia's largest construction company CIMIC has inflated profits by around 100% in the last two years through aggressive revenue recognition, acquisition accounting and avoidance of JV losses. A lack of supporting cash flow has been obscured by the increased sale of receivables and reverse factoring of payables. While reported net cash was 69% of equity at YE18, we estimate adjusted net debt-to-equity of 74%. CIMIC’s refusal to provide substantive answers to our questions suggests it has something to hide.

CIMIC came to our attention owing to a large restatement of its shareholders’ equity. It is controlled by ACS (ACS SM) the Spanish construction giant, via its German subsidiary Hochtief (HOT GR), and is a major value contributor for both companies. CIMIC’s board is dominated by an Executive Chairman who is also CEO of ACS and Hochtief. Unsurprisingly, management has been generously incentivised to maximise the share price, and grow profits and operating cash flow. These incentives may have led to the profit inflation we have found.

CIMIC has reported robust earnings growth in recent years, with net profits growing 50% since 2015. However, this growth is an illusion. We estimate CIMIC has inflated reported pre-tax profit by roughly 100% over the past two years, or A$1bn in total, through a combination of aggressive revenue recognition, acquisition accounting and avoiding losses from its Middle Eastern JV. Key warning signs include the build-up of unbilled revenue and the low level of cash tax paid. Indeed, CIMIC has paid just A$161m in tax over the last three years on profits of A$2.8bn, implying a cash tax rate of less than 6%. It suggests profits declared to the tax authorities are much lower than reported earnings.

We estimate CIMIC has inflated reported pre-tax profit by roughly 100% over the past two years, or A$1bn in total

Aggressive revenue recognition is the main technique CIMIC has used to inflate profits. We estimate this has boosted pre-tax profits by A$300-400m in both of the last two years, based on increases in unbilled revenue and deferred tax liabilities.

The use of percentage-of-completion accounting gives CIMIC’s management considerable discretion over when and, indeed, how much revenue and profits to recognise. Revenue can be booked even before the customer has been billed or the amount agreed. Aggressive revenue recognition is reflected in the high level of unbilled revenue on CIMIC’s balance sheet, included as contract assets within “contract debtors”. At over 9% of revenue at the end of 2018 on an adjusted basis [1], CIMIC has the highest level of net contract assets in its peer group, as Figure 1 shows. 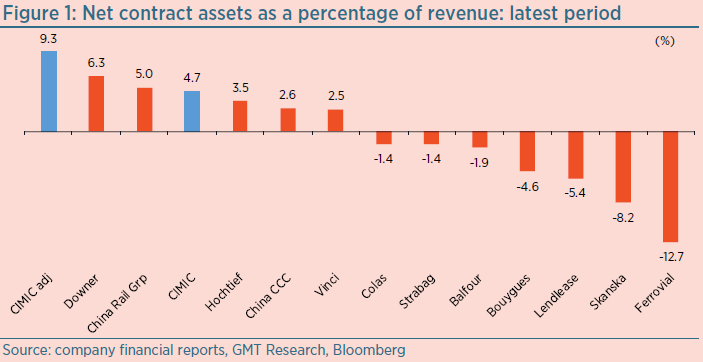 The reversal in previously booked revenue shows up as a big reduction in CIMIC’s net contract debtors (primarily unbilled revenue) which halved on the restatement, as Figure 2 shows. However, contract debtors have rapidly risen back to their previous level, although CIMIC refused to say how much is due to recognising revenue a second time. We estimate the extent of CIMIC’s aggressive revenue recognition at A$300-400m in the past two years based on the A$0.4bn increase in net contract debtors in 2018, which was equal to 35% of CIMIC’s pre-tax profit, and the significant growth in deferred tax liabilities (taxes payable in future years resulting from temporary differences) relating to “contract profit differential”, corroborated by the low cash tax paid. 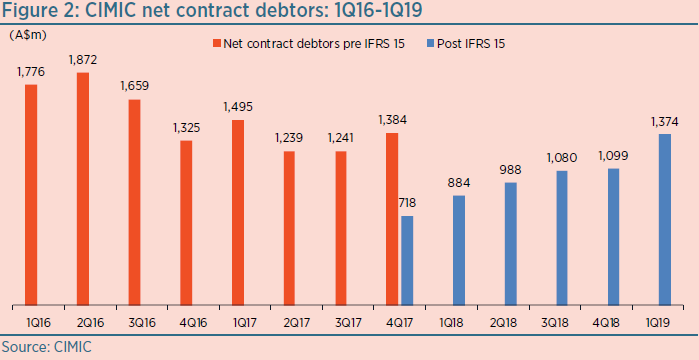 The second method CIMIC appears to have used to inflate profits is acquisition accounting with the purchase of UGL in 2016. Suspicions are raised by the large reduction in UGL’s net assets on acquisition and the immediate jump in profits afterwards.

An acquiror can boost future profits by writing down the value of the target’s assets, such as inventory and fixed assets, or creating additional provisions or other liabilities, which can be utilised or reversed in future periods. At its last balance sheet date prior to its acquisition in June 2016, UGL had net assets of A$331m. However, this had become net liabilities of A$484m when CIMIC consolidated it just a few months later. This is a massive reduction for which CIMIC provides no explanation. The total difference excluding intangibles of A$559m is roughly the amount by which CIMIC has written down UGL’s assets and increased its liabilities. CIMIC would not disclose the adjustments made, although it appears mainly due to a big increase in payables.

Following the acquisition, there was an immediate jump in UGL’s profits; it recorded EBIT of A$166m in 2017, its first year under CIMIC’s ownership, compared with just A$63m excluding provisions in its final year as an independent company. By recognising additional liabilities and probably writing down assets, we think CIMIC primed UGL for a rapid increase in profits. We estimate this has boosted CIMIC’s pre-tax earnings by around A$100m in the last two years. Furthermore, the size of the reduction in net assets suggests that CIMIC will be able to boost UGL’s profits for several more years.

By recognising additional liabilities and probably writing down assets, we think CIMIC primed UGL for a rapid increase in profits.

Finally, CIMIC appears to have stopped recognising losses from its 45%-owned Middle Eastern JV, BICC (previously HLG Contracting), after its carrying value was reduced to zero with the introduction of the new accounting rules on revenue recognition. Unfortunately, CIMIC refused to tell us whether it has stopped recognising BICC’s losses. BICC contributed a loss of A$93m in 2017 but no details are provided for 2018. Its exclusion could explain the big swing in the contribution from joint ventures and associates in the income statement from a loss of A$50m in 2017 to a profit of A$59m in 2018. In addition, CIMIC has continued to book interest income on loans it has made to BICC even though it is not being paid. We estimate that these have boosted CIMIC’s profits by around A$50m in each of the last two years, although without more information this is largely guesswork.

CIMIC has hidden the poor underlying quality of its earnings through increased factoring of receivables and reverse factoring of payables, inflows from which are treated as operating activities. We estimate total operating cash flow of A$3.1bn in the past two years may have been inflated by A$1.4bn, or over 80%. Our estimate is supported by the widening gap between average and year-end debt numbers, and ballooning non-interest finance costs.

We estimate total operating cash flow of A$3.1bn in the past two years may have been inflated by A$1.4bn, or over 80%

CIMIC explicitly disclosed for the first time in its 2018 annual report its factoring of receivables. Increased factoring can create the illusion of operating cash inflows. CIMIC refuses to disclose the amounts factored but it is clear that they are large and have grown substantially in the last couple of years. An idea of the extent is given by the increase in restricted cash relating to the sale of receivables; the year-end balance has risen more than threefold from A$167m in 2016 to A$580m in 2018. Assuming a 2:1 ratio of receivables to restricted cash implies A$1.2bn of receivables had been factored at the end of 2018, and indicates an increase of more than A$0.8bn in just the last two years. However, CIMIC would not confirm whether this is a reasonable estimate.

Reverse factoring typically involves a company setting up a facility with a bank which allows suppliers to present approved invoices for early payment in return for a small discount. The company repays the bank on the invoices’ original due date. The facility is normally presented as a benefit to suppliers, by giving them the option to be paid early. However, its introduction is frequently accompanied by a lengthening of the payment period. The amounts owed by the company to the bank remain on its balance sheet and, as with CIMIC, continue to be classified as payables rather than debt. CIMIC provides no information on the amounts outstanding under its reverse factoring facilities, which is not required under current accounting rules. Indeed, one of the controversial aspects of the recent insolvency of Carillion, which had been among the UK’s largest construction companies, was its failure to disclose the substantial amounts due under its reverse factoring facilities.

A rough estimate of the amounts outstanding can be calculated based on the increase in payables. CIMIC’s total payables increased by nearly A$1bn in 2018 alone. Based on the increase in payables days over the last few years, we estimate up to A$1.1bn is outstanding under reverse factoring facilities, and it has boosted CIMIC’s operating cash flow by around A$0.6bn in the last two years.

Another reason to question the underlying strength of CIMIC’s cash flow is the widening gap between period-end gross debt figures and period averages, which CIMIC discloses in its average cost of debt calculations. Thus, while CIMIC’s gross debt fell to just A$0.5bn at the end of 2018, the average over the year was A$1.9bn, as Figure 3 shows, a difference of A$1.4bn, up from close to zero in 2016. We suspect this is due to increased factoring/reverse factoring by CIMIC towards period-ends, aimed at flattering both its balance sheet and cash flow statement. The size of the gap between the two figures also broadly supports our view that CIMIC has boosted operating cash flow by around A$1.4bn in the past two years. 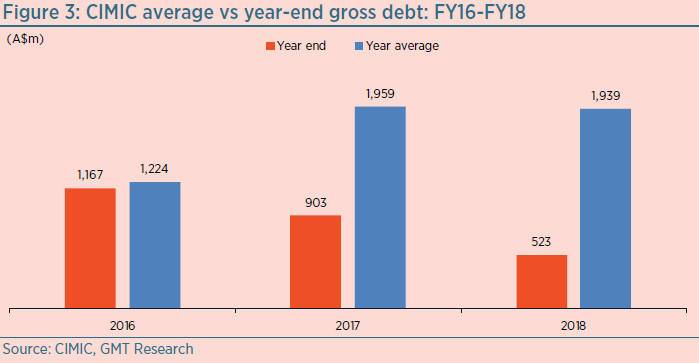 CIMIC has seen a big rise in non-interest finance costs, which have more than doubled over the last couple of years, as Figure 4 shows. We suspect the increase is primarily due to costs incurred in relation to the factoring of receivables. This provides further evidence that the company is window-dressing its cash flow statement. 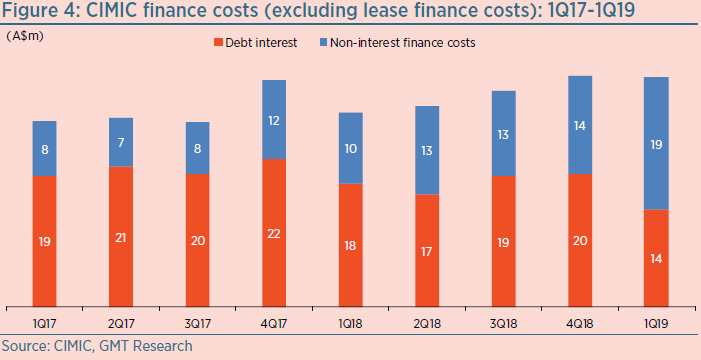 At first sight, CIMIC appears to have a robust balance sheet with reported net cash of A$1.6bn at the end of 2018. However, closer examination suggests a far weaker position. Based on the average debt figure, and including leases and guarantees on BICC’s debt, we estimate CIMIC has adjusted net debt of around A$1.7bn and a net debt-to-equity ratio of 74%. However, CIMIC’s refusal to disclose the extent of its factoring and reverse factoring makes it impossible to get a clear picture of its true indebtedness. Furthermore, CIMIC’s small tangible equity base is vulnerable to external shocks and could easily be wiped out, particularly if it is forced to write down the value of unpaid receivables and amounts lent to BICC.

As part of our research, we sent CIMIC a series of questions. Unfortunately, the company failed to provide substantive answers to any of them. Some of the most important unanswered questions include:

[1] After adding back an A$675m provision CIMIC took against contract debtors in 2014 which remains unused
[2] AASB 15, which is the Australian equivalent of IFRS 15
Insights

Nigel Stevenson
Artificial sales from Celltrion (068270 KS) to its sister company Celltrion Healthcare (091990 KS) have led to a massive build-up of unsold inventories on the latter’s balance sheet. A billion dollar write-down could be on its way. By selling almost all of its drugs to Healthcare, Celltrion has been able to consistently overstate revenue and profits. It recognised sales even...
Read More

Asia’s most manipulated market is…